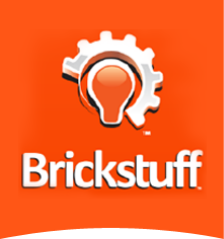 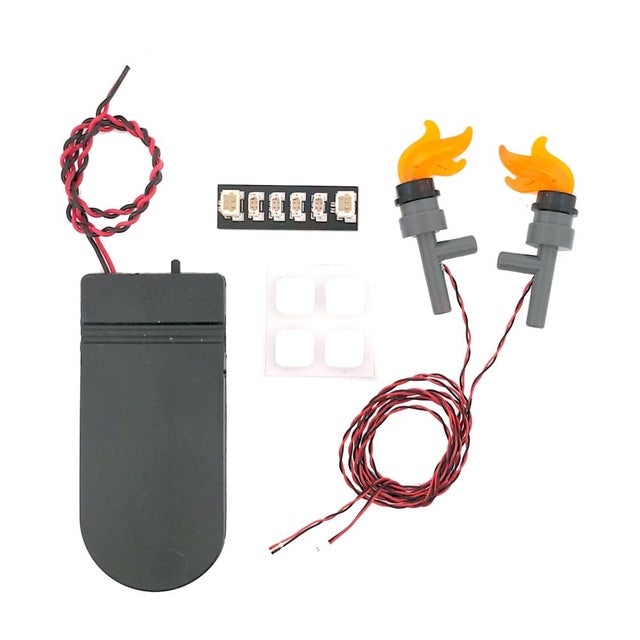 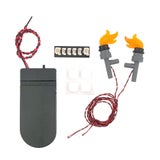 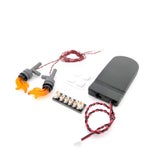 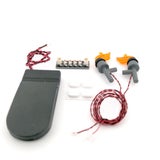 We put our tiny flickering Pico LED lights inside of LEGO® torches with flames on top. This all-in-one kit includes everything you need to add two torches to any set.

These Flickering LEGO® Torches Are Perfect for Any Set

It's never been easier to add flickering torches to any medieval or military model—just attach the two torches included with this kit, connect them to the included dual size expansion board, and connect the battery pack.   We've even included the batteries!

The battery pack has an on-off switch, and this kit also includes small sticky squares in case you need to use them to mount the expansion board or battery pack somewhere hidden.

These torches look great in action.  Here's a demo of the flickering effect:

Best of all, these torches flicker on their own—no effect controller is needed!  Just plug them in and watch the warm glow.

These torches are also 100% compatible with most other brands of lighting products, so if their small plugs match ours, you can use them with sets or lights you may already have purchased elsewhere.

The flame tops are not glued on, so you can remove them and replace with flame elements of different colors or sizes.  Make huge flames, make blue flames, make anything you need for your torch-lit empire!

​
This is not a LEGO® product. This kit contains re-used LEGO elements in new condition that have been repackaged or altered from their original form. LEGO® is a trademark of the LEGO Group of companies which does not sponsor, authorize or endorse this product.